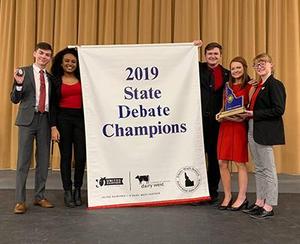 This is the sixth-straight state trophy placement for Columbia High.

Individual results are as follows:

This is the sixth-straight state trophy placement for Columbia High.  Previous placements were:

In addition, Columbia qualified five students who will attend the National Speech and Debate Championships this coming June in Dallas, Texas. They will join more than 6,000 other students from across the country competing for a national title and scholarships.